Almost half of individual users following JUUL’s official Twitter account (@JUULvapor) are underage, according to a new research study, despite the company’s previous claim that it has only marketed its products to adult smokers.

The study, published in JAMA Pediatrics, analyzed data collected from all public active profiles following JUUL’s Twitter account in April 2018. Out of the 9,077 active individual followers, researchers estimated that 80.6% were aged 13-20 and 19.4% were aged 21 and older. The estimates show that the majority of people following JUUL’s Twitter account were younger than the legal age to buy e-cigarettes and “likely exposed to JUUL’s social media marketing practices.”

Since its inception, JUUL Labs has relied heavily on social media to market and promote JUUL. For its launch in 2015, the company spent more than $1 million to market JUUL on the internet and has paid for campaigns on Twitter, Instagram and YouTube to promote images and company-sponsored ads that associated the device with being cool, having fun, relaxation, freedom and sex appeal. The company used young adult models and influencers to promote the brand and marketed youth-appealing flavors — calling into question its statements that the product’s youth user base is purely accidental.

Many examples of JUUL’s early Twitter marketing strategy being youth-focused exist, including a collection of JUUL ads and promotional activities compiled by Stanford Research Into the Impact of Tobacco Advertising. Researchers at Stanford University found that “JUUL’s advertising imagery in its first six months on the market was patently youth-oriented” and the company used traditional tobacco industry advertising themes that may draw adolescents to smoking. 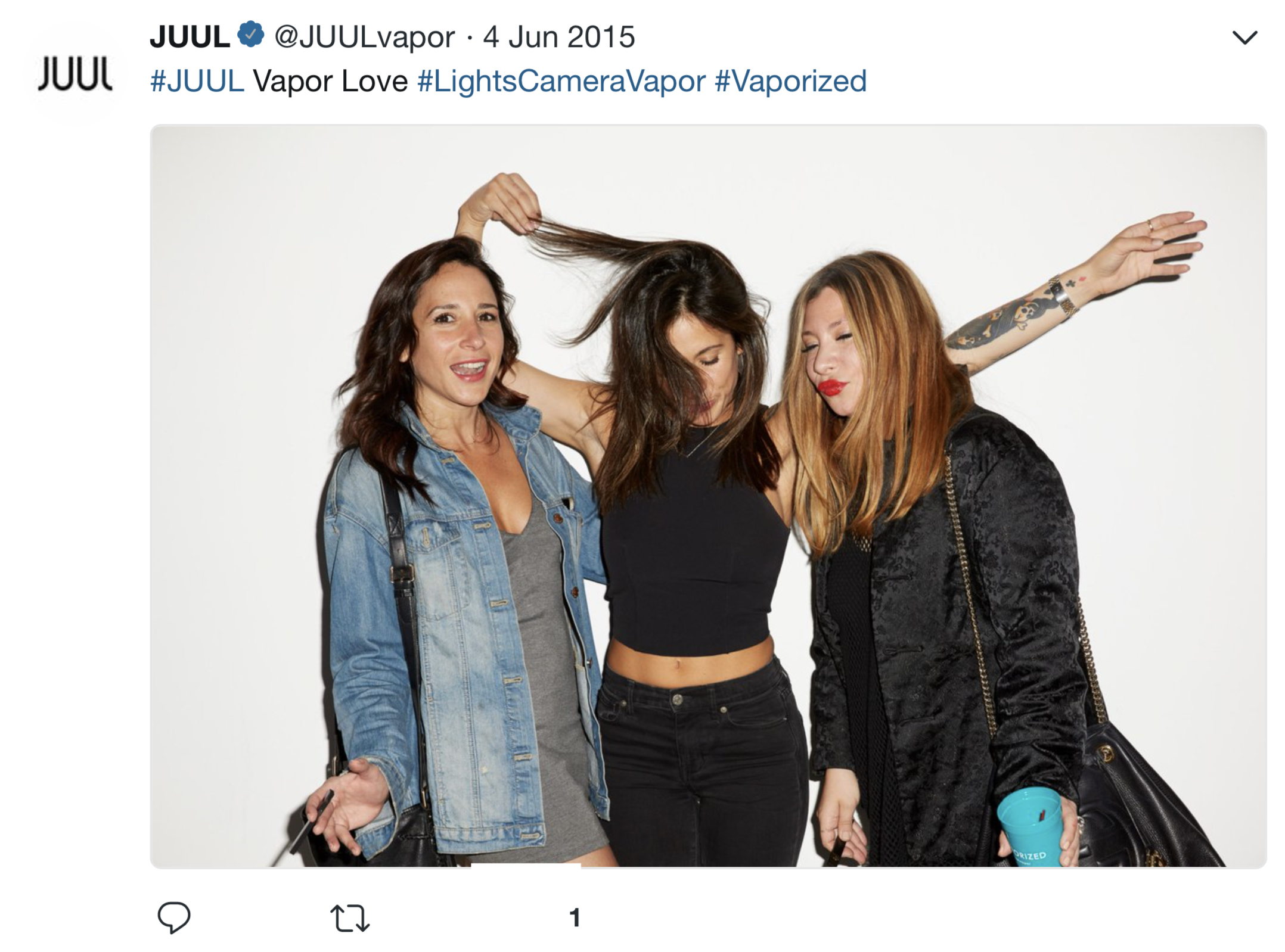 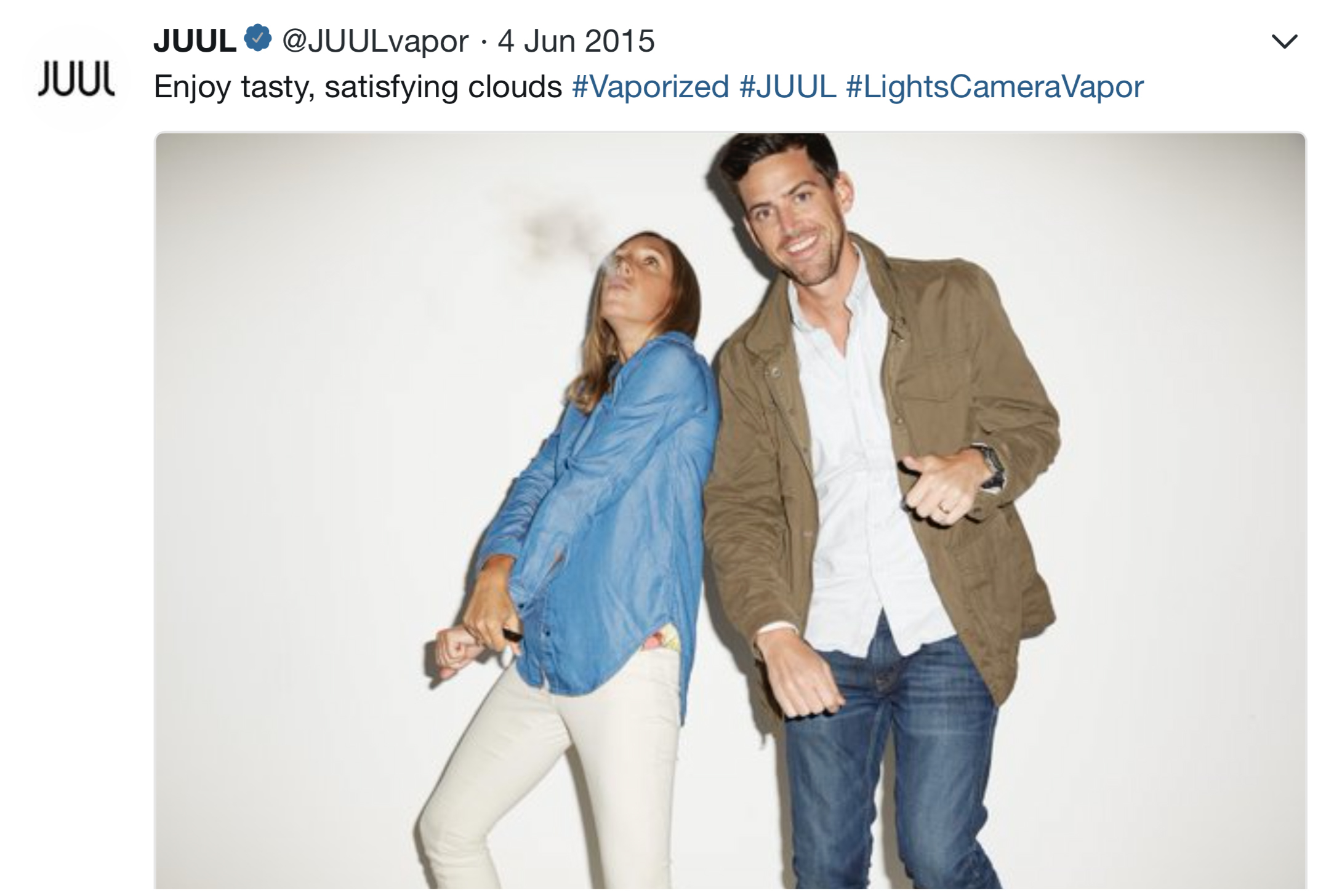 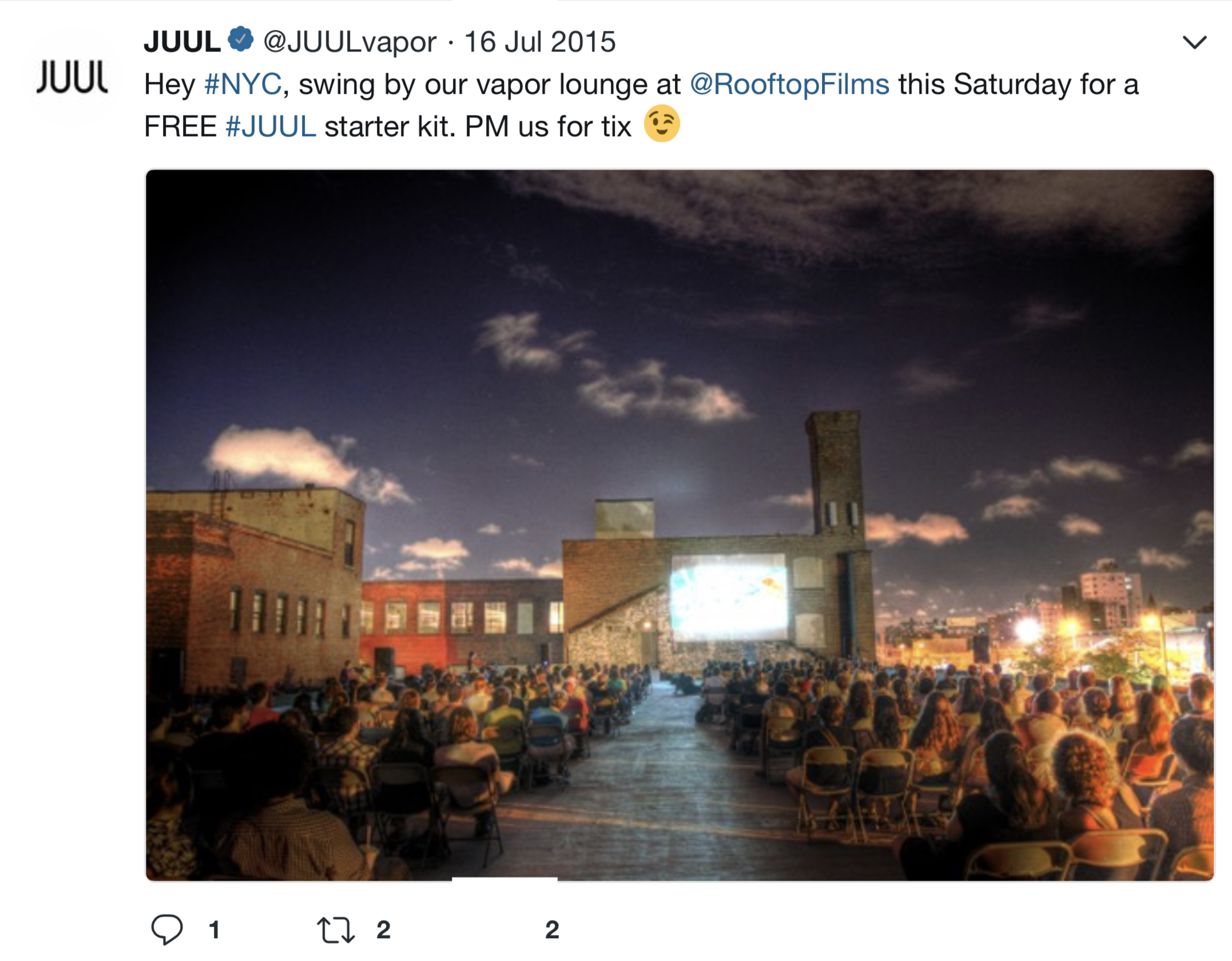 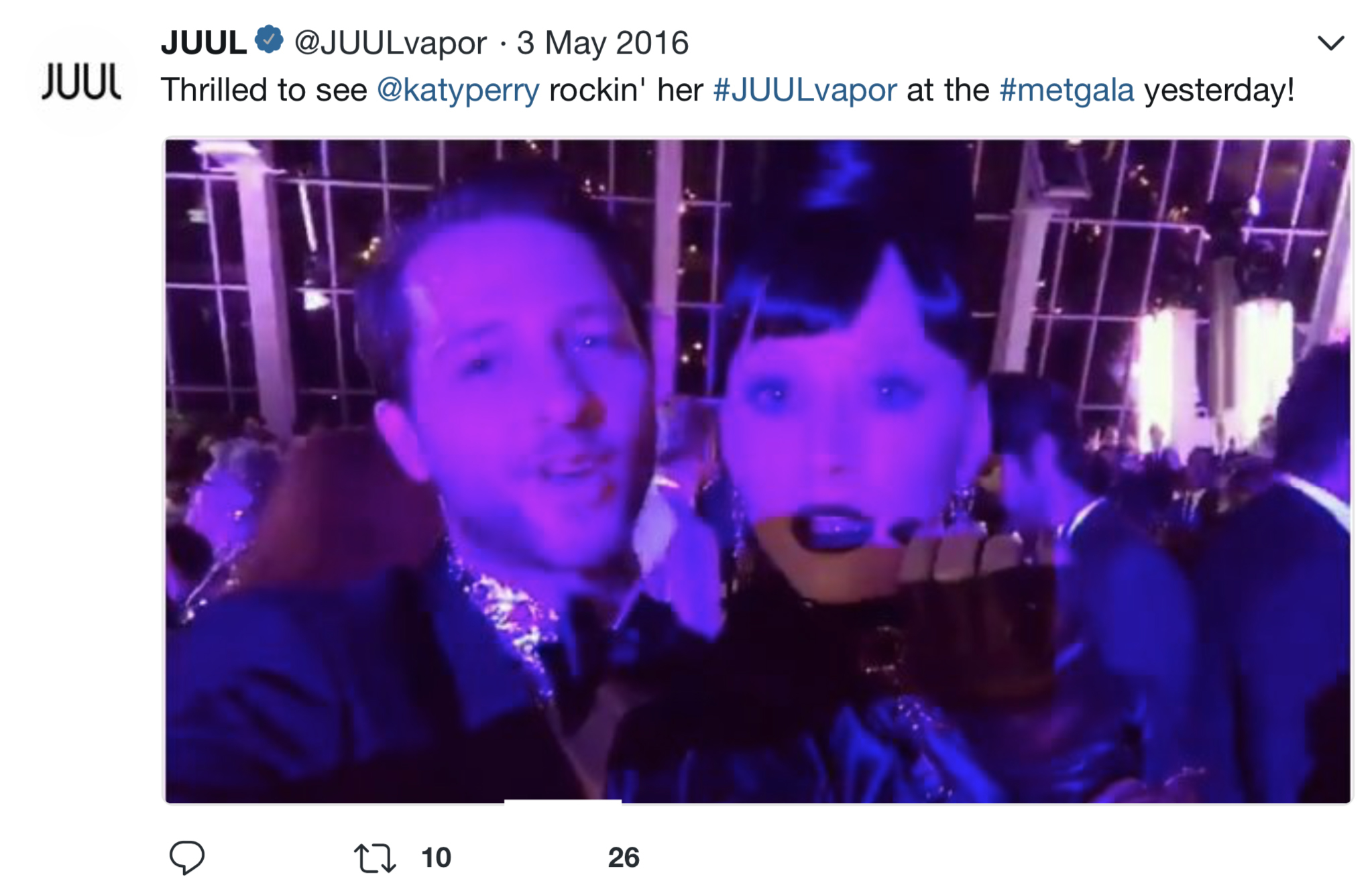 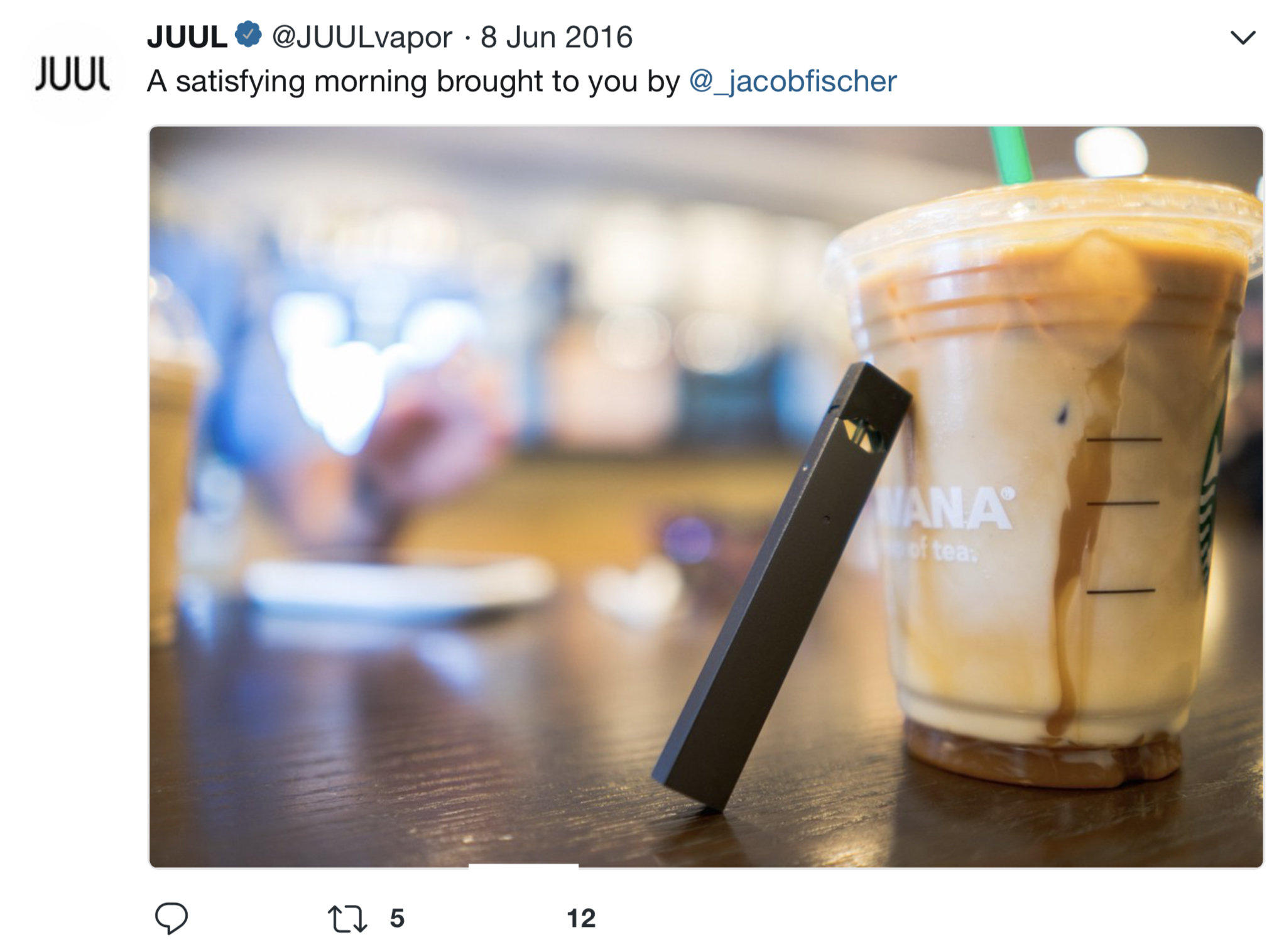 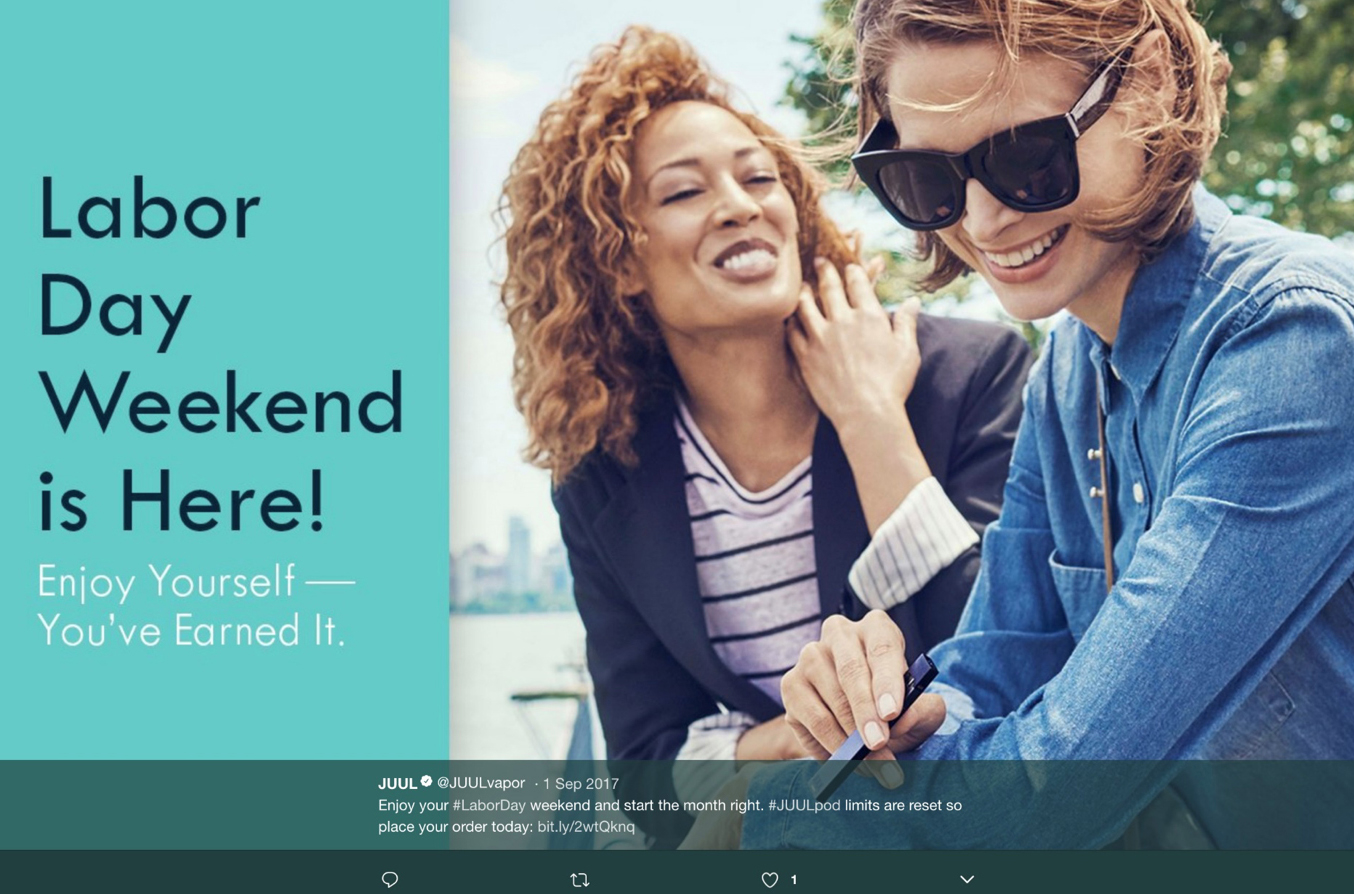 According to SRITA, “JUUL established its popularity among teens by stimulating a community of ‘JUULers’ who post enormous volumes of favorable comments across social media channels.” Images of tobacco product use have influence, especially among susceptible youth and young adults and on social media, which plays an important role in communicating social norms. In fact, research shows that youth being exposed to e-cigarette advertising increases intentions to try e-cigarettes among potential new users. It’s not surprising that the U.S. is currently amid a youth e-cigarette epidemic — driven by JUUL — which has caused widespread concern for potentially addicting a new generation of U.S. youth to nicotine.

In June 2018, JUUL Labs stopped featuring models and influencers on its Instagram, Twitter and Facebook accounts and implemented a social media policy to only feature former adult smokers who switched from combustible cigarettes to JUUL. It also modified its Twitter account to focus on corporate communication. Following criticisms of its role in the youth e-cigarette epidemic, the company deleted its Instagram and Facebook accounts in November 2018. But while JUUL has changed the nature of its social media posts, “the viral peer-to-peer spread among teens the company initiated will live on indefinitely, or at least until the teen craze for JUUL abates,” SRITA said.

The researchers conclude that more action is needed to protect young people: “This finding suggests that the U.S. Food and Drug Administration and state regulatory agencies should mandate that JUUL and other tobacco companies report data on their social media followers to ensure that youth are being restricted from accessing age-restricted content online.” 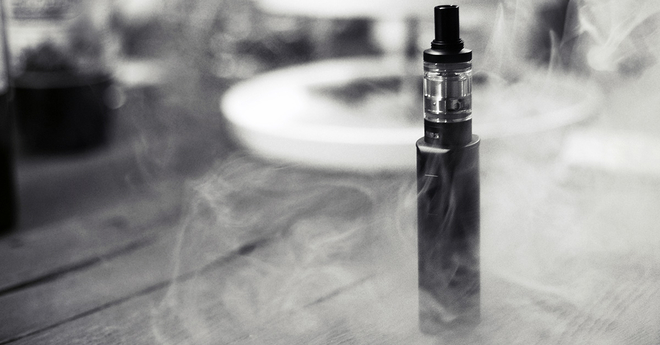 What is Zyn and what are oral nicotine pouches?